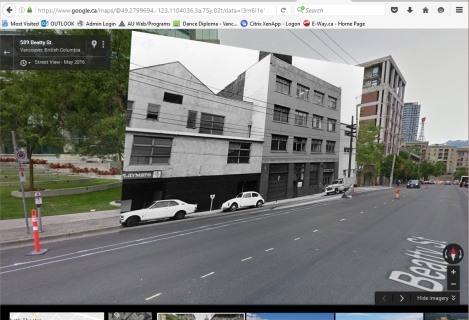 In 1967, a group of artists came together in Vancouver to found Canada’s first artist-run centre, and their original brick and mortar location was a multi-story building housed at 575 Beatty Street, that had formerly been a Catelli spaghetti factory.

One of the first official documents written to outline the activities of this group was titled “INTERMEDIA: A survey of Intended Project Areas”, and it has never been reproduced in it’s entirety.

My intent is to perform several public readings of the entirety of the document written by Orcutt, on the spot where 575 Beatty Street used to be found. These readings would take place at different times of day or evening, during busy transit hours and through the dead of night. These readings would be both recorded through up-close audio, and with video from afar, yet always from the same view point.

As such, the proposed work “575 Beatty: A Reading Memory of INTERMEDIA” would seek to create a virtual monument to both the location of Canada’s first artist-run centre, and to one of it’s first cultural producers, David Orcutt, who passed away in July of 2009. This piece will be presented as one of the first three projects under the HAPPENSTANCE banner, curated by Whitney Brennan, for DECOY Magazine.

(With many thanks to Micheal de Courcy for permitting the liberal use of his photograph of the original INTERMEDIA location, which was used to produce some of the promotional imagery for this project.)